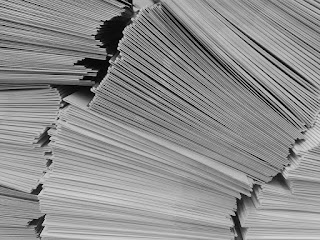 She piled them up as they arrived, and let each one expire. All of her memberships and affiliations came due, and she let them pass: the community center, the gym where she used to take water aerobics, the professional associations, the charities she most cherished, her congregation. She looked indifferently at the mass-distributed images of sad puppies, hungry children, people laughing on exercise bikes. What was the point, she wondered?

The pile grew, and grew. She hadn't realized how many organizations claimed her among their own, how many bills demanded payment, how many associations assumed she could not do without them. After two weeks, the pile had overtaken her coffee table. After two months, the envelopes carpeted the entire floor of her small living room. She lay there and watched the piles grow, their presence threatening, overwhelming. After two years, the envelopes had reached her neck, and she was entirely paralyzed.

She cast her eyes about, the only part of her she could move. They landed on an envelope. Different from the others. Smaller. Gentler. Handwritten. She could not see the front of the envelope, only the rear flap, upon which someone had scrawled I miss you.

She blinked furiously, willing the letter closer to her, wishing she had some way to reach it. To read it. The mail carrier arrived at her door, knocking slightly as he deposited the next round of menacing correspondance. The slight knock, the weight of the new arrivals, something shifted the pile near her face and the small, sweet envelope slid her way. It tilted, and she could almost see the return address: almost, but not quite. All she could see was something familiar, something comforting, something that was not an ask, not a request or solicitation or reminder, but just might be an offer.

She closed her eyes, exhaled, and clawed her way up from the pile of papercuts. Sitting atop her captors, she slid her finger beneath the seal of the small card, and trembled with anticipation.
flash fiction flash fiction Fridays magical realism microfiction writing