Things I Learned When a Fledgling Fell

on June 09, 2019
We have a birdhouse in our backyard. To our delight, a sparrow family lives there, and they have three babies who made their arrival a couple of weeks ago. We've enjoyed watching those wide-mouthed (wide-beaked?) youngsters sing for their supper, watch their parents puff their little feathered chests and holler bird cusses at our dog when he takes a step in their direction, and generally took joy in the antics of our tiny winged backyard tenants. Then yesterday, one of the fledglings fell from the house.

It happened right after I finished mowing the lawn (thank goodness for that timing - and side note, if you want to feel irritated about uninvited misogyny, check out my Tweet from while I was mowing). I wasn't the one who noticed the fallen fledgling. It was our dog, Oz, who spotted it. I saw Oz run over to the back of the yard, put his nose to the ground, then look over at me. "What's up?" I called. Oz looked down, wagged his tail, and looked over at me.

I walked over and saw the bird on the ground, crouched just inches from Oz's big ol' snout. 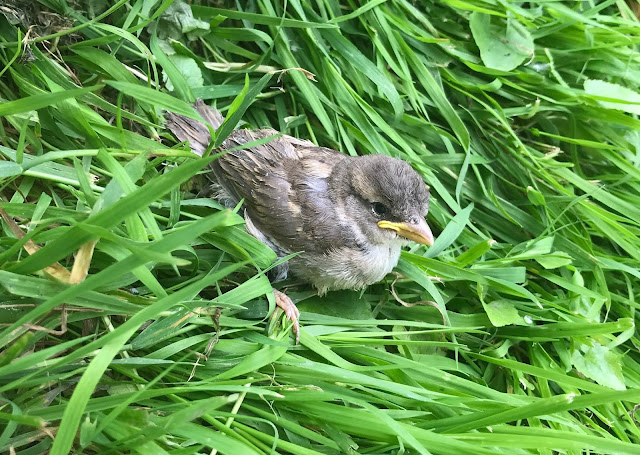 "Leave it alone, be gentle," I told Oz quickly, and he begrudgingly took a step back and gave me a wounded look that said I was already being gentle. Which, to be fair, he was.

Let me back up for a second and tell you about Oz. Our Oz is a Court Case Dog whose life was saved by Safe Humane Chicago. We rescued him through their partnership with Chicago Canine Rescue. In a nutshell - he was confiscated as part of a trial and up until 2012 would have been euthanized for no good reason, but Safe Humane Chicago now pulls dogs out of the court system and finds them new homes. Oz, formerly called Flyer, is one of those dogs. He's also a "bully breed." (We think he's boxer-and-lab-and-something-something-something. Plenty of people would look at him and simply say "PIT BULL.")

I Googled what to do about the baby bird. I learned the importance difference between nestlings (baby birds still sans feathers, who should be put back in the nest/house - the whole "mother won't return if they smell your human odor" is a myth when it comes to birds) versus fledglings (baby birds WITH feathers, who suck at flying but should NOT be returned to the nest or taken away, because their parents will help feed them and teach them and their odds are better if you just stay the heck away from them). This bird is a fledgling.

So I told Oz to just guard him from afar but stay away. And he did.

A few minutes later, Mama Bird swooped into the birdhouse to feed the squalling fledglings still safely nestled there. Then she brought the grounded fledgling some food, too. She fluttered beside him as he tried a few more hopping flaps. Oz and I watched from the deck.

I was reminded of and/or learned several things today when the baby bird set out for its next adventure:

May we all learn to fly in our own good time.
xoxo
Beth
backyard birds learning to fly my dog